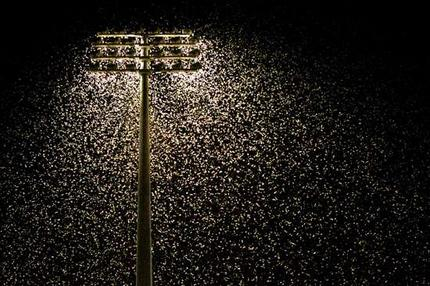 Moths gather at a streetlight
Photo by S. DePeak

As moth’ers, we know better than anybody that moths are attracted to lights. However, when this occurs unintentionally across large scales – such as in highly light-polluted cities, the effects can be detrimental to moth populations.

Scientists at the university of Exeter in the UK have quantified declines in moth populations across the country. As with most species declines, habitat loss is playing a major role in moth species declines. However, moths are also suffering due to another cause – light pollution.

These bulbs attract more species AND more individual moths. Flying around a light prevents moths from performing their natural foraging and mating behaviors. They waste energy and are also susceptible to predators that use lights as easy hunting grounds.

Of course, streetlights are an important and necessary safety feature in populated areas. But researchers suggest that switching to LED bulbs that produce single wavelengths of light may reduce the impacts on moth populations.