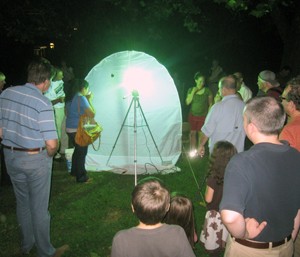 “A crowd of 50 surrounded a 175 KW ultraviolet blacklight with a pale sheet to learn about moths during the first ever National Moth Week in Southampton, New Jersey. The July event is one of over 200 events occurring in different locations through July 29.

National Moth nights have been held elsewhere in the past, but Elena Tartaglia, a Ph.D candidate in ecology from Rutgers University, says that “this week is the first time when a full week is dedicated to learning about moths.”

Currently, there are 49 states in The U.S. and 20 countries participating in the event.

Experts say there are more than 10,000 species of moths compared to about 725 regularly occurring species of butterflies in North America.

Moths, however, also contribute positively to native ecosystems. These furry, winged insects serve as food for bats, foxes, and even coyotes. Unhealthy populations or counts of moths can help detect environmental changes. Moths are also nocturnal pollinators and through pollination help restore native wildlife. Their ability to fly up to five kilometers away provides greater chances of cross-pollination between plant species.

While Moth Week served as an educational event for many who attended, others found it to be a helpful example of how they could set up their own moth events.

“I tried holding my own moth nights, but I didn’t get any moths. I used baits with old bananas and beer and I got ants, but no moths,” Edgewater Park, N.J. resident Steve Mattan said.

Thanks to the outdoor demonstration, Mattan says he realized what he was doing wrong.”

Read the rest of the article…