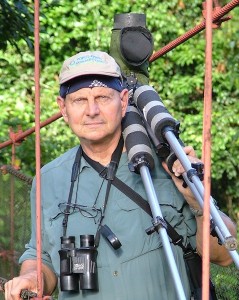 Julian Donahue is a retired curator of Lepidoptera at the Natural History Museum of Los Angeles County, where his specialty was the taxonomy of tiger moths (Arctiidae), carpenter moths (Cossidae), and phycitine pyralid moths of the New World, especially of the American southwestern deserts and the Neotropics. He is a past president of The Lepidopterists’ Society, and has been the Assistant Secretary in charge of maintaining the membership database since 1984.

Since retiring he has spent more time birding than lepping, but for Moth Night in Elyria Canyon Park he’s going to dust off his black and mercury vapor lights for the community, and see what sort of critters are attracted. The 35-acre park is in the suburban community of Mount Washington, at an elevation of around 600 feet, boasting one of the finest remnants of California Black Walnut woodland (Juglans californica), foodplant of at least three moth species that we will be looking for: Walnut Underwing (Catocala piatrix), the recently described Walnut Geometer (Macaria juglandata), and the Obsolete Gretchena (Gretchena obsoletana). The chaparral and coastal sage scrub components of the park (with Toyon, Laurel Sumac, California Sagebrush, California Coffeeberry, Redberry, Golden Currant, plus many other shrubs, herbs, and grasses) will, we hope, yield a few of their moth treasures for inspection, while some invasive and pest species may show up from nearby developed areas. With luck, there will be a Black Witch migration and one may show up to wow the group.

Joining Julian to talk about the moths and other insects that show up will be Daniel Marlos, webmaster for the popular What’s That Bug? website.