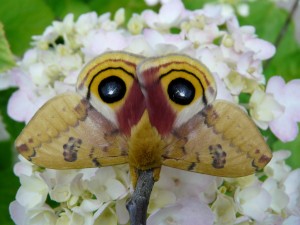 Shawn Wainwright is hosting a NMW event at Cattus Island County Park Nature Center. Cattus Island is located on NJ’s Barnegat Bay and is home to the Cooper Environmental Center. The park consists of maritime pine/oak forest as well as a network of freshwater wetlands containing several species of hardwood trees. The varied environment of Cattus Island should yield a great diversity of moths!

For his National Moth Week event, which he is co-organizing with Lou Prosperi, Shawn plans to set up black lights and sheets around the nature center as well as bait some trees along Cattus Island’s trails.

Shawn has been fascinated with birds since he was a child growing up in his home town of Toms River, NJ. Shawn is an expert birder, and spent years giving tours with famed birder Fred Lesser, out of Cattus Island County Park. As his love of nature and birds grew, Shawn expanded into studying butterflies, moths and dragonflies. He has amassed a large collection of photographs over the years, carefully documenting every sighting and every new species he encounters.

You can see all the moths Shawn has photographed along with his life list at his flickr page.

Featured in this post are photos that Shawn has provided of his four favorite moths: the io moth, small-eyed sphinx, azalea sphinx and sundew dart.