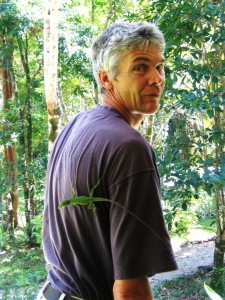 The National Moth Week team is delighted to welcome its newest member, Ian Morton of Belize, an avid supporter of citizen science and NMW participant, who created the moths-of-belize.com website.
As a team member, Ian is serving as an administrator of NMW’s Flickr page, which recently has tripled its membership and number of photos on it.
Ian lives in the Toledo District of southern Belize, where he built and runs a small jungle guesthouse, and a large bug board. Being in the midst of an abundant source of nature and wildlife, his general love of nature soon expanded into a passion for bugs, butterflies, and moths.
He said he supports citizen science not only for its merits in terms of data collection but, perhaps more importantly, for its ability to create a new generation of nature lovers who, in turn, spread the word to their friends.
Ian has participated in various citizen science projects over the years, including recording bat data and keeping records on howler monkey activity in the area. He held his first Belize National Moth Week event in 2013.
With over 1,000 photographic records, his Flickr page risked being overwhelmed with moths and, frustrated by the lack of a central data source for the small country (as well as his wife sagely noting that the Flickr page was really intended to promote the business), he set about creating the moths-of-belize.com website. The website now has over 1,700 records of moths at the guesthouse, and he continues to add to the site on a regular basis.
Ian is NMW’s second international team member. Artist Belen Mena of Ecuador has designed NMW’s unique visual identity seen in its logo, certificates of participation, and on shirts and other products.
NMW team members are volunteers who contribute their skills to the international citizen science project.