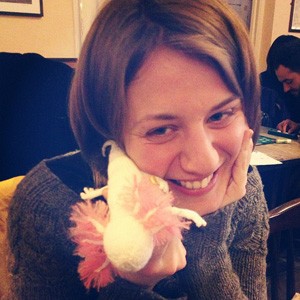 I’m Max Alexander and I love knitting moths. Until last year I spent most of my time making knitting and craft themed jewellery and occasionally knitting strange creatures. Then a friend mentioned that he thought a knitted Rosy Maple Moth would be cool. I’d never heard of it and was impressed by how strange and pretty it was. I started looking at other pictures of moths and quickly became obsessed. I’d always thought of moths as tiny beige things that would eat my wool. I had no idea how varied and beautiful they could be. 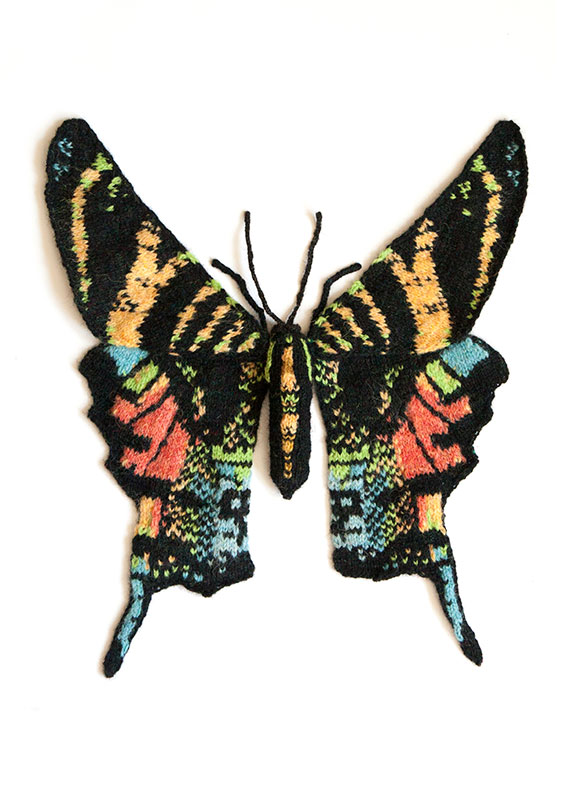 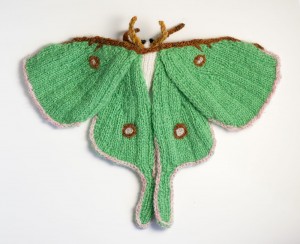 Once I started knitting moths I was offered the opportunity to have an exhibition of them in a yarn shop called Prick Your Finger in London. So by November I had quite a collection of moths including a Luna moth and a couple of different tiger moths. I framed them up and labelled them with their common and scientific names. They’ve proved to be quite popular so far and I keep discovering new more wonderful moths. 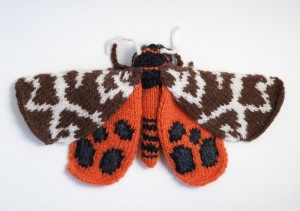 The list of ones that I want to make is getting a little out of control. I’ve even made an extinct moth, the Urania Sloanus, that I saw on twitter. All of my moths so far are based on photographs or specimens but I’m hoping to be able to study some live ones soon.

Once I heard about National Moth Week I thought it would be a good excuse to knit a lot more. I will be putting a new moth online every day during NMW including the beautiful Automeris Io.

It’s great being able to use knitting to spread the word about the wonderful world of moths. I try to be as precise as I can, but I hope the experts won’t mind a few of the knitted inaccuracies…!

3 thoughts on “Knitted moths – a guest post by Max Alexander”