The Year of the Sphingidae – Pollination

Sphingidae (and several other moth taxa) play a critical role in many ecosystems – that of pollinators. Pollination is a mutualism – an ecological relationship where both partners get a benefit. The pollinator gets food in the form of nectar (and sometimes pollen) from the flower, while the plant gets pollinated – that is, it is fertilized and can go on to produce seeds that will grow into the next generation of plants. 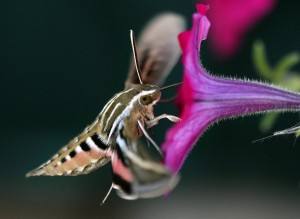 Since moths lack jaws and possess a proboscis as a mouthpart, they don’t eat any of the pollen that collects on their bodies when they visit flowers. They use their proboscis to collect nectar only  – this is in contrast to bees and beetles that directly consume pollen as well as use it to provision their nests. Hawkmoth probosces can be very long – in some cases several times the length of the moth’s body. Later I’ll do a post on a famous example of this. 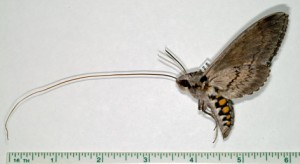 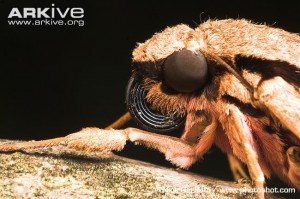 Sphingidae keep the proboscis rolled up when not in use

Hawkmoths can’t visit just any flower to drink nectar. Since the majority of hawkmoths are nocturnal, they are restricted to visiting flowers that are open and producing nectar at night. Most people are aware that some species of flower close at night, but did you know that flowers can produce varying amounts of nectar depending on the time of day?

Flowers visited by hawkmoths also tend to be white (or very pale yellow or pink), colors that are easily visible to moths flying in the dark. Hawkmoth-pollinated flowers also tend to be heavily-scented, as these insects have evolved excellent olfactory systems to locate flowers at night – they can detect scents from flowers up to a few kilometers away!

Because of their long probosces, hawkmoths have trouble accessing nectar in flat, open flowers (for example a purple cone flower or similar). They generally to visit flowers with a long, tube-like shape. 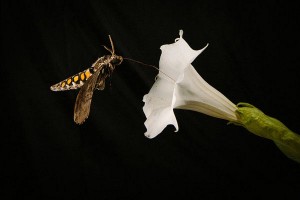 A Manduca hovers while drinking nectar from a Datura flower (note the white color and tubular shape of the flower)
Photo (c) K. Riffel

Hawkmoths are attracted to flowers that produce large amounts of nectar. As I mentioned in a previous post, hawkmoths are capable of hovering flight, which requires a lot of energy. That energy is provided by the sugars in flower nectar.

Now, from the moth’s perspective, it’s getting a reward in the form of nectar from a flower. But what is the flower gaining by employing a moth as a pollinator rather than using a bee, a hummingbird, a beetle, etc? As I mentioned earlier, hawkmoths can be long distance fliers, often traveling several kilometers in one night in search of nectar. This means that pollen is carried further away from the plant in which it originated, potentially leading to increased genetic diversity for the plants. Additionally, since moths don’t eat or groom away any of the pollen that collects on their bodies when they visit a flower, any pollen on them has the potential to be deposited on the next flower, rather than being lost.

Another reason why plants might employ a nocturnal moth pollinator is because there are fewer flowers and fewer pollinators available at night, since the majority of flowers are open and pollinators are pollinating in the day time. This means that flowers can potentially reduce the chances of receiving pollen from the wrong species of plant (which won’t lead to the production of seeds).

Moths don’t pollinate any of our food crops, however, they do pollinate many native and garden plants. Take a look in your garden or a nearby garden to see if you can spot any potentially moth-pollinated plants!

10 thoughts on “The Year of the Sphingidae – Pollination”