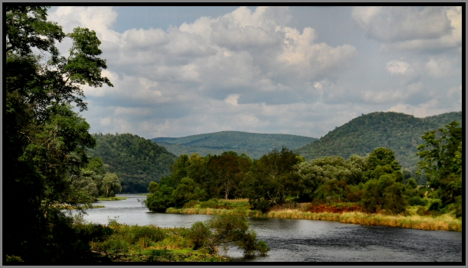 West Branch of the Delaware River as seen from Deposit, NY

This lovely long-form blog is courtesy of Eric C. Reuter. All photography is (c) to him. You can also check out his excellent bird photography here.

It is a place that had never truly been explored for moths. If it had been, we surely would have heard about what lives in these woods. With its swamps and lakes, abundant ferns, mosses, fungi, aquatic plants, huge Hemlocks, and countless other host plants and varieties of trees and shrubs. This location can best be described as a temperate “rain forest”.  It gets more than its share of rain, and condensation (dew) overnight. Almost every morning the trees are dripping as if it had rained the night before. It rarely gets above 85 degrees in the middle of summer, and night temperatures in the mid 40’s are not unheard of in July on top of this mountain.

The area where I did my observations is sparsely populated, with mountains, dense woodland, rivers, lakes, streams, marshes, swamps and pastures. No large scale development, no industries, no shopping malls. The nearest town is over 5 miles distant, and has a population of less than 900 people. The nearest actual city of any size is almost 50 miles distant.

The last few years I have had a front row seat in a locale that has all of these diverse habitats right nearby my family cabin on a lake in those dense, dark woods. I was never prepared for what I would see when I turned the lights on, hung the sheets, and “baited” the trees.

Last year we did a registered, public National Moth Week event for the entire week, to allow anyone interested to pick a day suitable to them. We had a few visitors to this remote locale. It was a great week, with one night close to 150 species seen, and on another, we approached 200. 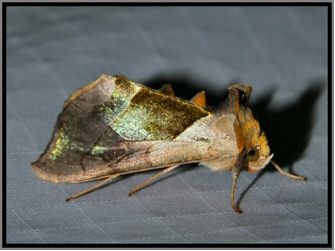 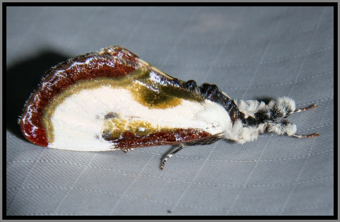 The woods here have been largely untouched for around 9,000 years, give or take, since after the last ice age ended and trees, shrubs and other plants found their way there and started to grow. There is no obvious evidence of a fire ever consuming it, as deep pits that were dug to the bedrock nearby show absolutely no indication of a burn ever occurring in the sediment layers. The ecosystem there has been evolving, growing, decaying and replenishing, and maintaining a balance unlike so many other places. I credit that fact as contributing to the abundance of moths we can see there, along with the incredible diversity of habitat and plant life to support so many different kinds of moths, and other wildlife. The entire area is abundant with life as it exists and grows, virtually uninterrupted or disturbed by man or natural disaster for thousands of years.

Between 2011 and 2013, we have counted over 1100 different species at this location. The sheets can be insane during June and July especially. We added a Mercury Vapor lamp in 2013 to the array of UV, CFL and incandescent lamps of previous years. Sugar bait was used liberally as well. This turned “extremely busy” finding and photographing moths, to “off the charts crazy”.

We found members of virtually every moth family, including some pretty uncommon species. It was a feast for the eyes, a workout for the cameras, and a real challenge to do the ID’s and to document everything. But what a problem for us to have!

For 2014, we (my fiancé and I) are hosting another public event there for the entire week, for National Moth Week. We expect to have an amazing turnout of moths, and hopefully a few more human visitors. This year we will be looking to advertise in the local paper, and around the surrounding villages to see if we can drum up further interest.

The village and township here rely on tourist dollars in summer, for boating and river rafting and kayaking, some of the best trout fishing in the country, camping, and also from local summer camps that have large numbers of attendees. In winter, it’s the hunters that come and provide some influx of money to the local economy. Overall, the area is still rather poor, and struggling, but it is one of the most beautiful places on Earth. One thing we are hoping to do is to introduce an element of “eco-tourism” with promotion of the area as a fantastic place to study moths, butterflies and diverse and some rare flora. We are hopeful the local businesses and Rotary and other organizations (such as the youth camps) may be receptive to the idea.

Our first step this coming year of 2014 is to promote the National Moth Week event as a way of showing the locals that there are treasures here they never considered, and perhaps a way to help add to the desirability of a place to explore for those who love nature and the study of moths and other wildlife and plants that are so abundant. Ultimately, we would love to work with local people to establish or promote the idea of butterfly gardens, moth friendly gardens, and to generate interest on a wider scale, and perhaps bring more people into the fun and excitement of mothing.

These just scratch the surface of the amazing week (and year) we had. Mothing becomes more addictive every year, and we continue to learn more about them. During the spring, summer and fall, we observe and photograph and love the thrill of going to the sheets to see what new things are there. It is always exciting. In the cold winters of the Northeast, moths are scarce at best, and then only during warm spells, so we spend that time going over photographs and doing ID’s. We still have many too look through, and some older shots to reevaluate for identification.

One of the fascinating things about mothing in the Catskills, in an area that experiences distinct seasons with varying and changing hours of sunlight, temperatures and plant growth, is seeing and documenting the different species and when they appear. Their flight periods. Over the last few years, we have taken notes about when certain species first appear (and then disappear) from our sheets, and it has been remarkably predictable for most of them. We get an occasional late straggler or early arrival, but overwhelmingly, we can almost predict to the week when some species will show up. In the Southern Catskills, the “signature” moths of the seasons are many, but some stand out.

The warmer seasons are very short in these mountains, and as a result, the bulk of species we will see arrive during mid to late May, and diminish by early November. Of course, some species can be seen during warm spells before or after that time, but in very small numbers.

In the late spring and very early summer, we see the Giant Silk Moths. Luna moths, Cecropia, Polyphemus, and our most plentiful Sphinx, the Waved Sphinx moth. Also, the early flying Prominents and Daggers, Geometrids and Loopers arrive, along with many others. By early to mid June, the woods explode with thousands of moths coming to the sheets, and hundreds of species appear. This continues throughout late June and into July, when other species of Sphingidae start to arrive, such as the Blind-Eyed, Huckleberry, Small-Eyed, Northern Pine and others. The Clymene moths start to show up along with other Haploa species, and we are still at peak with a huge overlap of moths that have longer flight periods or multiple broods, and total numbers go off the charts.

By late July, virtually no giant Silk moths are around anymore, and some of the Borers and many more Crambids are appearing, as well as good numbers of Tolype species moths and the Maple Spanworm moths. And so it continues well into autumn, when the Hemlock Loopers and Sensitive Fern borers and Bronzed Cutworm moths herald the arrival of the cool weather. At the very end of the season, the False Hemlock Loopers arrive en masse, then the very late flying borers, with the last abundant moth of the year being the Bruce Spanworm moth. When they arrive, we know that the mothing season is coming to an end for the most part, which is always a bit sad for us.

Although we can predict many species that we will see, the great fun and excitement of mothing is finding those “new” or uncommon species that we may not have seen before.  We were surprised in 2013, when hundreds of Rosy Maple Moths showed up, where in past years we would see maybe a dozen. We also had upwards of 50 Luna Moths, where in previous years we would be fortunate to see just a few. 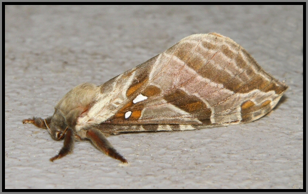 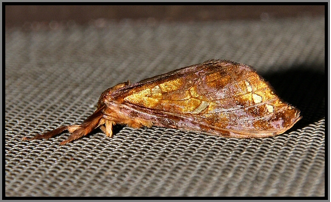 Some typical moth turnouts on a couple of our secondary sheets during the summer: 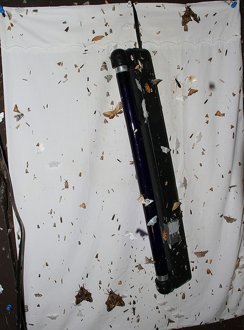 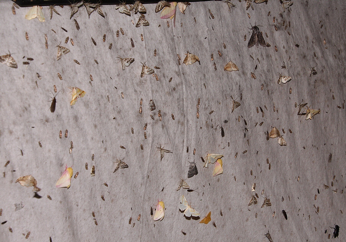 The incredible abundance and variety of moths at this locale has so inspired us, (and overwhelmed us), that we are considering authoring a book about it. Nothing so grand in scale like a field guide, but about our experiences. The thrill of mothing, and of these ancient woods and the secrets they hold, with many photographs of what we found.

I’m afraid that my fiancé Lisa Deubel and I are hooked for life on this incredible hobby, and in being able to perhaps contribute valuable data for research into these wonderful and incredible creatures of the night.

We are very anxiously looking forward to the warmer weather and hopefully many new surprises visiting our sheets and baited trees, and in particular to National Moth Week 2014. 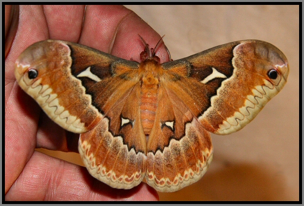 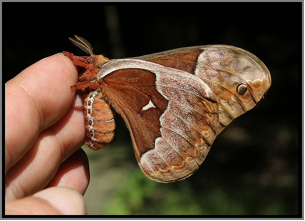