With winter upon most of the country, it doesn’t mean the end of moth season, it just means we need to think a little bit differently about how to find them. An age-old technique called “sugaring” or “baiting” is often used on warmer nights when the temperatures are about 50 degrees at dusk. The sugar bait is painted on trees with a paintbrush just before dark. Then the trees are searched right after dark with a flashlight to see if anything has been attracted to the sweet ambrosia. Most sugar bait recipes use a combination of brown sugar, beer, overripe fruit and molasses. The mixture is then allowed to ferment for a day or two before being applied to the trees. But most moth’ers modify the recipe to their own liking adding other ingredients or changing their ratios. Sugar baiting for winter moths (it can be used at other seasons too), is fun and always an adventure to see what will be attracted.  Many moth’ers on the awesome Moth and Moth Watching Face Book Group have shared their recipes and experiences about sugaring over the past month. They provide a treasure trove of interesting and helpful tidbits about this technique. Some of these are noted below to get you started. But, it is also fun to note, that much of the futility and success they have experienced is virtually the same as moth’ers were experiencing over 100 years ago. Below is a passage from an 1897 report about “Mr. Shoemaker’s way of doing it… 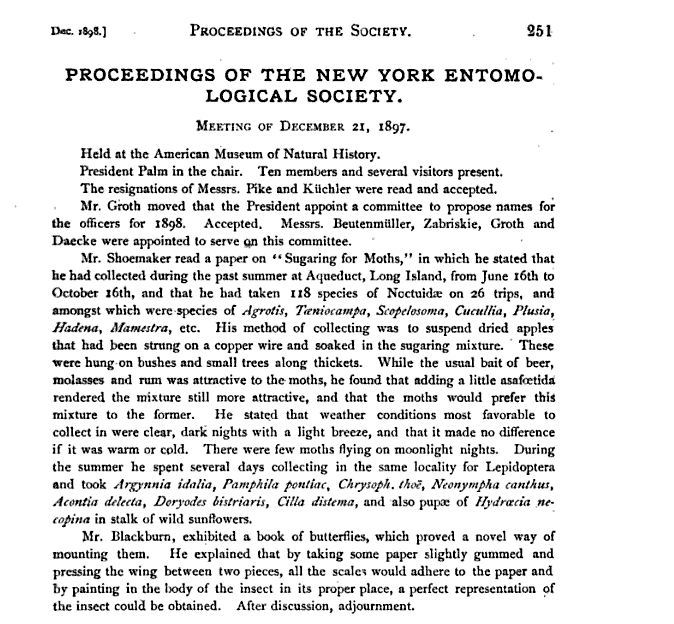 Here are some tips from fellow moth’ers from the Facbook Mothing page:

Marvin Smith – Baiting Notes: I reapplied a coat of McGuinness‘s Moth Magnet bait during the late afternoon. I’m applying the bait to oak slabs sawed while cutting firewood. The slabs are more portable than trees. I can easily experiment with different locations. I can also pick them up during the day so our dogs don’t lick off the moth bait. I usually just lay the slabs down flat on the ground, on a pile of rocks, on a stump, wherever. That way the bait doesn’t run off the slabs. Based upon very limited experimentation, location in our yard does not make any difference.
Shortly after sunset a half dozen or so moths were attracted to the bait. The temperature was around 53°. All were Armyworm Moths (Mythimna unipuncta – 10438) except for this Dart. Within 30-45 minutes, all the moths disappeared. The temperature had dropped a couple of degrees. I have no idea whether the time of day or the temperature was the critical factor in the moth’s exit.

Dave Small – I seem to have turned the corner this fall in the baiting game. I have no set formula and use whatever fruit I have on hand for a base but try to get bananas whenever possible. I take my fruit and mash it up with some wine or beer into a slurry. add a couple cups of sugar (white or brown) a shot of rum and a dolup of molasses or maple syrup. The important thing seems to be having it at a consistency that is a slurry that can be applied with a 3 inch paint brush so moderate the liquid to match the solids. I then paint a 10 inch by 16 inch patch on several (now up to 12) trees in the yard and adjacent woodland. I mix the tree species painting both hard and softwood trees with the slurry. I do this in the afternoon and begin checking immediately as the sun dissappears and 2-3 times after as temps hold above 40. I have had a lot of success into the first week of December Athol (Central) Massachusetts. I have a tall tupperware container I use to make bait and I keep it going by adding new sugar fruit etc. every few days… (I keep the lid loose) I bait about 12 trees now plus an old platform feeder.

Jackie Nelson – Buy a very cheap bottle of White Wine and add about 2-3 spoons of sugar to it. Shake it and let it sit, although I usually use it the same night. The longer it sits the better. Cut a piece of clothesline (I’ve been using anchor rope lately) to about a three foot length and dip both ends ( go up the ends a good 12 inches ) in the wine bottle . Hang the rope over a limb so both ends are dangling. On a good night, during the winter, the ropes will be covered with moths. Best time is between dusk to around 2000 hrs and when the temperature is in the low 40s. I usually hang between 4-6 ropes on various limbs or off the porch lights. I usually dip the ropes back into the wine nightly, but I’ve seen moths still come to the ropes without redipping them.

Ken Childs – I’ve been making small batches with varying ingredients, hoping I’ll stumble on one that works. White sugar, brown sugar, overripe banana, overripe grapes, beer, wine, molasses, and yeast are the ingredients I’ve been playing around with. If you’re using inexpensive brown sugar, that’s usually just white sugar mixed with molasses so using white sugar with extra molasses should work just as well. I give my bait mixtures at least 3 days to mature in my relatively warm basement and I check the trees just before it’s completely dark and then every 30 minutes or so until around 8 P.M.

Dave Moskowitz – I find the bait works best when I split a few beers and maybe some rum with the mixture. Some beer and rum for me, some for the moths. Or maybe there aren’t really any moths? Seriously though, I live in a very residential area with big oak trees and the sugaring is sometimes fantastic and other times not a moth to be found. I think the mixture, weather, moon phase and other factors seem to effect it. One other thing I’ve noticed is that most moths seem to come to my bait for very short periods of time and then leave so really frequent searches helps. One other thing I’ve noticed is that white sugar is much less attractive then dark brown sugar. At least in my yard.

Hugh McGuinness – My understanding of bait is that you want it to be thick and almost paste-like, not runny. The reason is to avoid detection by ants, which will chase moths off the bait. My bait recipe is: 1 pound dark brown sugar mixed with enough beer to dissolve the sugar. Add a few tablespoons of molasses and 1-2 chopped bananas. Either use as is or let sit in sun for a few days. Re-paint the bait lightly each night in the same place.

The joy of sugaring for cold season moths – on wildnj.tv

More amazing fall moths with a sweet tooth – on wildnj.tv

Sugaring for moths on nationalmothweek.org

“Sugaring for moths” from W.J. Holland’s “The Moth Book”