Gil Wizen is an entomologist, wildlife photographer and blogger based in Canada, focusing on natural history, taxonomy, and behavior of several arthropod groups.

When all that people talk about right now is going outdoors with their smartphones and tablets to play the current-trendy Pokémon Go, an augmented reality game of hunting fictional creatures, it seems appropriate to remind everyone that a similar “game” was already in existence centuries ago and still goes on today. It is called being a naturalist, and the rules are pretty simple – you just go out to search for, observe, and document everything that nature has to offer. I guess making people spend more time outside is a good thing nowadays, I just wish they were looking more around them instead of having their faces glued to mobile screens. Nevertheless, many players reported that while playing the game they stumbled upon “real life Pokémon”, in other words wild animals such as snakes, birds and even mammals. Several biologists on twitter decided to take a nice turn on this game and came up with the hashtags #PokeBlitz and #PokemonIRL, tagging and spreading facts about various wild animals, plants and fungi. It is a cool initiative that I hope will spread like fire, but in any case I wanted to use this opportunity to mention another similar event happening this month – National Moth Week.

National Moth Week is a citizen science project that sets out to increase public awareness and appreciation of moth biodiversity. It has been running continuously for 4 years, with the main event taking place on the full last week of July. During this week, moth enthusiasts set up light traps to attract moths and record the species found in their area. They are often joined by professional lepidopterists (scientists studying this insect order), who offer assistance in identifying moth species and wait for cool and unexpected discoveries. With the current accumulating evidence of dwindling insect populations, especially those of pollinators like Lepidoptera and Hymenoptera, this activity has huge importance. National Moth Week has become a global joint effort to record moth species, yet the project’s title remains “national” to emphasize the outreach activity on the local scale. Anyone can join and attract moths in the comfort of their own home, but many groups hold moth-watching events at public locations, attracting a large crowd of enthusiasts and curious people (you can attend an event close to you by searching in the event map).

Many Crambid moth species, like this Desmia bajulalis from Ecuador, have iridescent scales on their wings.

Setting up a light trap for moth watching is super easy. All you really need is a light source, and turning on the porch lights is probably the simplest way to attract moths. If you want to invest a little more, you can get a light bulb with some output in the UV range, as many moth species are attracted to this type of light. Many entomologists and insect enthusiasts use high-output mercury vapor bulbs because their spectral range seems to be more attractive for insects compared to other bulbs. Personally, I do not like these bulbs; they are very fragile, become extremely hot during operation and quite finicky to set up in remote locations. I use a compact version of a bulb that has a similar spectral distribution and get good results. My setup is built to be portable, so I now take my light trap almost anywhere I travel.

Sometimes a light trap is not even needed for attracting moths. This gigantic white witch moth (Thysania agrippina) came to our bathroom lights in the Amazon rainforest, Ecuador.

The light trap I used at Caves Branch, Belize, attracted a nice variety of interesting moths, including members of genus Petrophila (mentioned previously on this blog).

Moths (and other insects) gathering around a light trap in Ecuador

When it gets crowded at the trap interesting behaviors can be observed, like this small moth feeding on a bigger moth’s hemolymph.

Finally, if you want to be able to record the species coming to your trap, you will need a surface for them to rest on. The simplest way to do this is by stretching a white sheet behind the light source. The flying moths will come to the trap, bump into the sheet and cling onto it, allowing close observation and photography. Not only moths, but also other arthropods can end up coming to the light trap as well. And, if you are lucky, even amphibians and reptiles can show up to take advantage of the abundant food.
The best thing about setting up light trap is that you never know what will show up. It is not uncommon to encounter a species that you do not know, or even better, find something that is very rare. 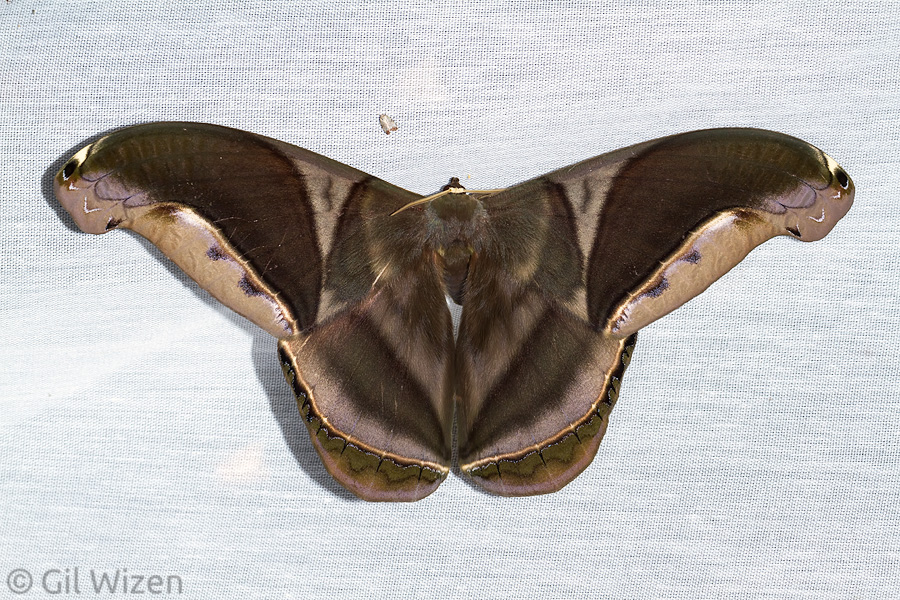 Giant silk moth (Rhescyntis hippodamia), one of the heaviest and largest moth species found in the Amazon Basin of Ecuador.

Geometer moth (Opisthoxia uncinata), from Limón Province, Costa Rica. This is probably one of the most common species in Latin America, it showed up in every light trap I have set up so far.

Do not forget to check the surroundings of the light trap for even more species! This wasp-mimicking moth (Gymnelia sp.) from Ecuador was found resting on the wall a few meters from the trap.

Some moths remind me of common butterflies. For example, this moth from Costa Rica somewhat looks like Small White (Pieris rapae)…

Even a silhouette can be interesting! Crambid moth from Mindo, Ecuador.

Sosxestra grata has become one of the most iconic Latin American owlet moth species, thanks to an excellent photograph taken by Thomas Shahan in BugShot Belize.

Some of the nicest wing patterns are found on the smallest species, like this delicate Crambid moth from Mindo, Ecuador.

So go out, and enjoy this fun activity. Moth-watching is the new birding. In fact, it might even be better than birding. It requires much less effort and preparations. In addition, the diversity of moth species found in a limited area can be astounding compared to that of birds. There is so much out there to discover, you really just have to look.

Originally published at http://gilwizen.com/national-moth-week/ on July 15, 2016.