The Hawkmoths of the northern Great Plains, an illustrated poster – Guest post by Gerald Fauske

The Hawkmoths of the northern Great Plains Poster is based upon specimens in the North Dakota State Insect Reference Collection (NDSU- Fargo, ND), specimens in the Severin-McDaniel Insect Research Museum (SDSU- Brookings, SD) an extensive literature search, about 45 years of collecting moths in the northern Great Plains by the author and numerous contributions from colleagues. The poster was produced because of inquiries from other researchers (NDSU) and Agencies (The Nature Conservancy, U.S. Forest Service- Sheyenne National Grasslands Regional office) as to sphingids present in North Dakota, and usually with reference to Western Prairie Fringed Orchid.

When the poster is reproduced at 30 x 36″ the moths appear roughly life sized. For the taxonomic ‘officianato,’ note that members of the subfamily Sphinginae are on the left, Smerinthinae in the middle, and Macroglossinae on the right. Which species to include in an arbitrarily defined area (North and South Dakota) is a nebulous concept. Included are year-round residents (names in white), annual immigrants (green) or strays (yellow). The Eumorpha anchemola was actually brought in with produce imported from Central America. A ‘tricky’ category includes those species whose natural geographic range borders the Dakotas- most of these species (blue) have not been found but all are expected with increased search effort. Species not on the poster are the erroneous literature records of Hemaris thetis and H. gracilis, and two strays: Erynnis alope and E. labruscae. These last two are subtropical moths with singleton records from Saskatchewan and Manitoba, respectively, although they likely traversed the Dakotas. Finally, there are species which have been recorded as strays just south and east of the area covered by this poster: Manduca albiplaga (NE) and Eumorpha fasciatus (NE, IA) or south and west of our area: Pachylia ficus (WY). None of these have been included. That these type of records are possible is shown by the two records of the Erebid Thysania zenobia (White witch moth) from North Dakota, one in 1957 and one in 2004. Given a long enough timeline, strong flying moths and favorable winds, eventually almost anything is possible. 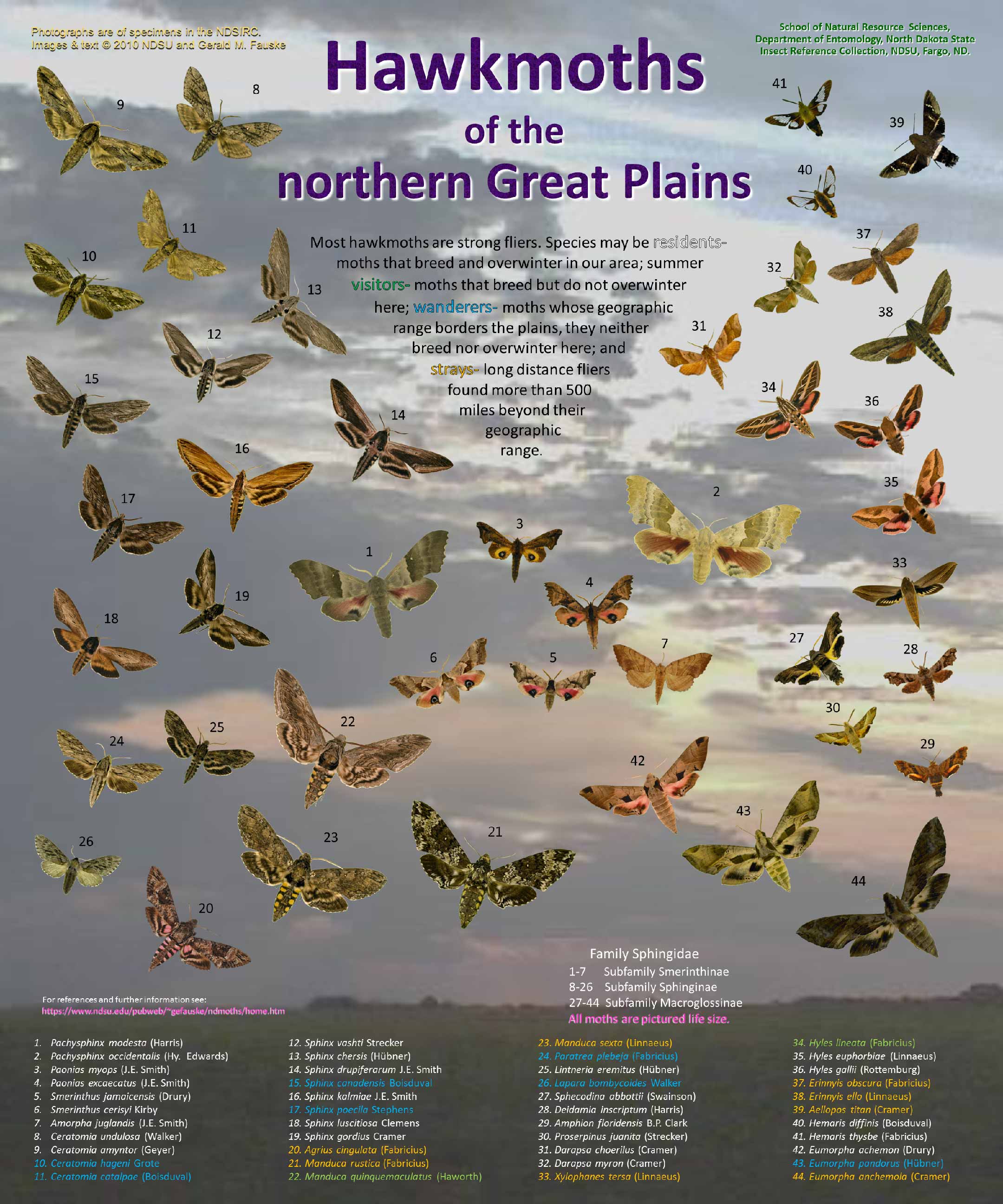 To see registered events and find public events in your area – click here.