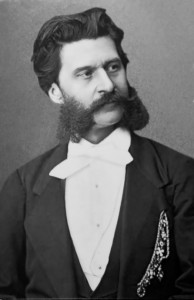 Before there was National Moth Week, there was the great 19th-century German composer Johann Strauss, who imagined the dancing and darting flight of the “night butterfly” in his playful waltz, “Nachtfalter (moth) op.157.”
According to Wikipedia, Strauss wrote the waltz in 1854 and it was first performed at a parish festival ball near Vienna in August of that year.
The work suggests the “whirring of the wings of a moth … and then its circling flight.” Most likely, political and other circumstances, including the end of “a devastating cholera outbreak,” may have prevented his imaginative work from reaching larger audiences. However, the composer Franz Liszt discovered the work’s charms and played it as a piano duet with his daughter. Further performances “confirmed the work as one of Strauss’ earlier inspired creations.”
Listen to this recording closely and imagine the flight of a moth as it circles and begins to land on your sheet during your moth night.