Project Noah‘s Moth of the Month is the Confusing Petrophila, Petrophila confusalis, spotted by Tristan Pragnell! Submit moths to the Moths of the World mission on Project Noah throughout the year to contribute to citizen science and global moth appreciation!

For many moths and their larvae, submergence in water can lead to an inevitable death. However, some moths, notably moths in the family Crambidae, subfamily Acentropinae, are able to live underwater as larvae, feeding on algae and aquatic plants. Moth larvae in the genus Petrophila are gilled, and create a silken shelter to hold on to rocks in lotic, or fast flowing, waters. These moths also pupate underwater, creating a small opening to assist in adult emergence. The adults emerge through the cocoon and can either float or swim to the surface, where they reach the stream edge to dry their wings and fly as adults. 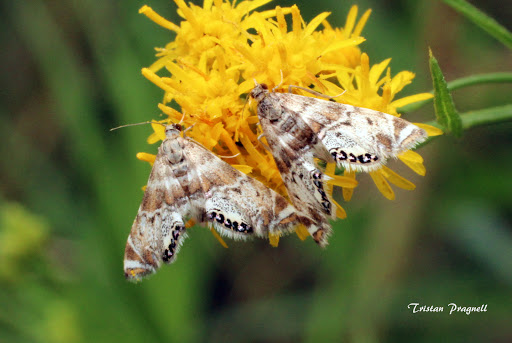 However, for females, this is not their last time in the water. After mating, the females of Petrophila confusalis, the species pictured here, form a thin bubble of air to deposit the eggs. The air can last them between four and twelve hours. Females are capable of laying eggs four meters deep, but some skim the surface of the water laying eggs, or crawl along rocks to oviposit on the underside of the rock. The females die in the water after laying their eggs, having made their contribution to the next generation of aquatic Lepidoptera.

Merritt, Richard W., and Cummins, Kenneth V (edited by). An Introduction to the Aquatic Insects of North America.

Spread the love
Tags: Moth Of The Month, project noah