I was counting down the days to my first chance to attend the Annual Moth Party at Marcie and Mike O’Connor’s Prairie Haven in Buffalo County, WI.  Marcie is absolutely brilliant at everything she does, whether it’s painstakingly restoring a sprawling farmstead to its original prairie/savannah habitat, meticulously cataloging the flora and fauna that show up, guiding nature enthusiasts through her masterwork, or bringing in the uninitiated to spark their appreciation.  And she always throws a heck of a good party, so I was very much looking forward to the fun, people, and food.  I just wasn’t sure about how I was going to contribute to that last one.

I’m not really an avid cook, but I do sort of enjoy ‘playing’ with food.  I was also trying to think of how I could do something in the theme of the party.  I didn’t expect I’d find much for moth decorations, so I googled butterflies instead and, with a couple of clicks, found this site for making chocolate butterflies.  http://www.howtocookthat.net/public_html/chocolate-butterflies/  You can find just about anything on YouTube.  It looked simple enough, so I ran to the grocery store and got almond bark, chocolate flavored almond bark (I guess there’s a tempering issue with real chocolate), food coloring, ziploc baggies and non-stick parchment paper.  Then I went to Marcie’s Prairie Haven site (http://www.aprairiehaven.com/) and picked some of her most stunning yet not too terribly intricate moths to try.  The first one was the luna moth.  I melted a couple of squares of almond bark and put in just one drop of green food coloring to get a soft green tint.  I also melted one of the chocolate squares to do the details.  I cut and creased some squares of parchment paper and piped out half of the luna moth, then folded the paper over to get the mirror image on the other side.  It 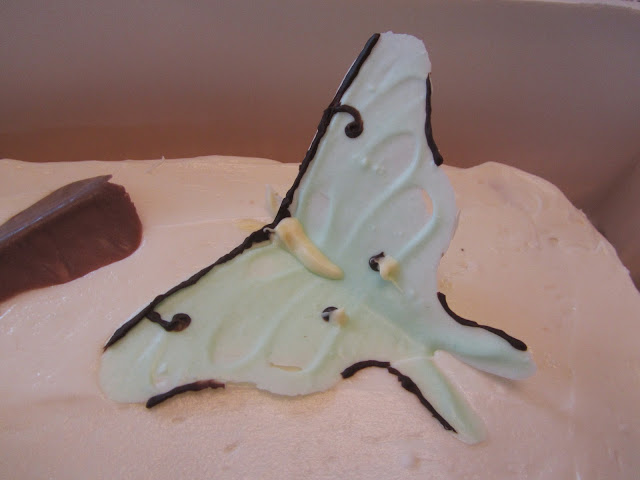 came out kind of pretty, but very smudged and swirly – not the sort of detail I’d hoped for.  So I decided I needed to first do just a green moth, then pipe on the details after it hardened.  That worked much better.  I followed up with a white-spotted sable, and then a sort of generic brown moth – the sort that people usually think of when you mention moths.  In fact, someone did comment that the brown ones almost looked real.  They may not have known much about the dazzling array of specimens Marcie and Mike were about to lure in for us after sundown!

My last issue was what to do with my little creations – put them on cupcakes?  Maybe a carrot cake?  (It’s a very organic crowd.)  Or 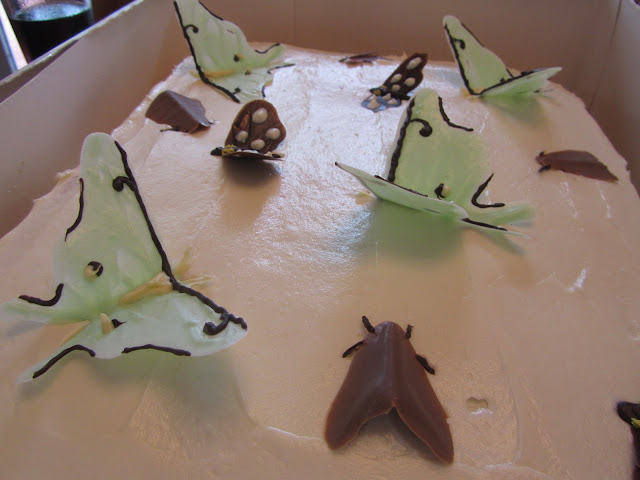 maybe a simple sheet cake?  Hold the phone!  Moths on a white sheet [cake] – that’s it!  So that’s the story of how I came up with the “Moth Cake” that ended up as the potluck centerpiece at Marcie and Mike’s fabulous Moth Party!  I’m sure I’ll do moths or butterflies again sometime – it was really pretty easy.  I encourage you to give it a try!