NMW Welcomes Carl Barrentine to Our Science Advisory Board 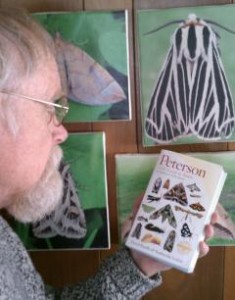 Carl’s academic training was in biology and he taught biology at CSU, Bakersfield for nearly a decade before being lured to the Midwest to engage in the pedagogical task of integrating the Sciences with the Humanities at the University of North Dakota. There, for over two decades, he taught in the Integrated Studies Program, designing and teaching interdisciplinary courses that encouraged students to critically contemplate the nature of knowledge, truth and reality from the perspectives of science, philosophy and religion. An old man now, but newly retired from his academic responsibilities, Carl rather quickly rekindled his latent childhood enthusiasm for the natural world by naively beginning the task of creating a digital video and photographic archive of local fauna. This would certainly only take a summer or two to do, he thought. Wrong. Wrong. Wrong. Dumfounded by the astonishing diversity of North Dakota’s and Minnesota’s moths, particularly the confounding plethora of noctuids and tortricids, well, let’s just say that Carl’s once broadly-oriented curiosity quickly metamorphosed into a hopelessly-focus addiction to ‘mothology’. He’s a ‘mothaholic’. “Gadzooks! Another lifetime! I need another lifetime to satiate this curiosity!” Yes, one might say that Carl finally found his ‘intellectual enlightenment’ on the ‘dark side’ of biology. And for the past three years, under the continuing mentorship of two well-trained North Dakota lepidopterists (Jerry Fauske, NDSU, Fargo; and Rebecca Simmons, UND, Grand Forks), Carl continues to dutifully devote the snowless months to the endless task of learning more and more and more about the many, many, many moths of North Dakota and Minnesota.