Naturalist Therese Cummiskey hosted our moth night with 1st session starting at 10:30pm, 2nd starting at 11:45pm. Moni Hayne, local entomologist discussed basic information about moths. Handouts of moth silhouettes were passed out and a slide show of local moths were available to view in the Nature Center.

We were excited to have about 30 participants(ages 2 to 60+), a third of which were children! About a half dozen folks stayed for both sessions. We saw about 50 different species of moths covering at least 10 families. Several that were seen have been posted on bugguide.net and were the first ones posted for Iowa.

Don’t think there was a favorite moth noted by the group. The largest was Catocala amatrix, wingspan 75-95 mm, The sweetheart Catocala, to the smallest, 6mm long – Walshia miscecolorella. The coolest insect for me was the mantidfly with prey.

Therese was so excited about the turn out and results we scheduled a moth night for July 24, 2013, during National Moth Week. 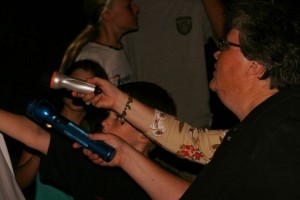