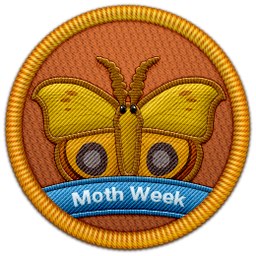 If a user contributed a spotting to the Moths of the World mission during National Moth Week, they were awarded a special limited-edition patch with a description of National Moth Week: “Great work! You’ve submitted a moth spotting to the first ever international Moth Week and are now part of moth history. We’re working hard to collect important data and show the world how awesome moths really are and we thank you for helping us out with your contribution. Now, let’s get back out there and spot some more moths!”

It was quite fulfilling being the creator of the Moths of the World mission to hear Project Noah users during National Moth Week say, “Wow! I never knew moths could be so beautiful! ” Leaving a light on during the summer nights usually opens a whole new world invisible to those who only view wildlife during the day. Moths are usually quite docile; especially the large sphinx moths and the silk moths don’t mind being held.

There are approximately 160,000 species of moths worldwide, with thousands more undiscovered.  Documentation from all over the world helps bring experts and nature lovers together to even further advance the discovery of new species! Even though there is such a vast amount of moths in the world, they seem to be stereotyped as drab, dull, gray, creatures. Upon a closer inspection, all moths, even the small gray ones, have intricate patterns which can easily be unnoticed.

A total of 684 spottings were submitted the Moths of the World mission at Project Noah during National Moth Week so far. Of those, 418 have been identified, and 266 still need an identification.  Click here to see a summary of all spottings.

Thirty countries participated in National Moth Week on Project Noah, ranging from Austria to Sri Lanka, making for a very exciting collection of moths! One species, Euproctis lutea, formerly only reported on the internet from Australia, was documented in the Philippines. The spotting can be seen by clicking here. Since then, there have been even more data points of this species from the Philippines. Documentation on the internet is quickly allowing experts and citizen scientists to help identify certain species, to more easily extend ranges, and to help collect data for certain organizations.

Highlights of the week include the colorful, almost rainbow-like Eucyclodes gavissima spotted by Project Noah user IrungbamJatishworSingh from Bhutan. A fantastically huge moth which appeared to be a tarantula, Trichophassus giganteus, was spotted in Brazil by asergio. CarolSnowMilne found a lovely yellow moth in Pennsylvania, Azenia obtusa. In Nigeria, dotun55 found an elaborate Bunaea alcinoe with some beautiful red and brown markings.

Don’t worry, if you were unable to participate this year, this National Moth Week will be the first of many! Of course, the moths don’t only come out during National Moth Week either! You can find them during almost every season, in various colors, shapes, and sizes! Go look for your favorite!