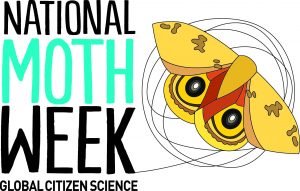 The diverse, fascinating Geometridae family of moths, comprising 23,000 species in North America and around the world, gets the spotlight this year for National Moth Week 2018, July 21-29. 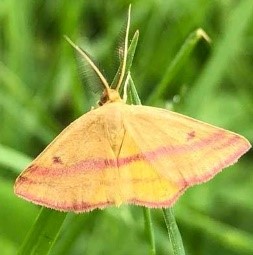 National Moth Week (NMW) invites moth enthusiasts, a.k.a. “moth-ers,” of all ages and abilities to participate in this worldwide citizen science project that shines a light on moths, their beauty, ecological diversity and critical role in the natural world as pollinators. Online registration is in full swing with events already registered in 10 countries and 17 U.S. states as of mid-May.

Since it was established in 2012, NMW has inspired thousands of public and private moth-watching and educational events around the world in nearly 80 countries and all 50 U.S. states. Sites have included National Parks and Monuments, museums and local recreation areas, as well as private backyards and front porches – wherever there’s a light and a place for them to land.

Though often maligned as butterflies’ unattractive cousins and nighttime nuisances, moths have always had loyal fans among entomologists and naturalists for their beauty and value as pollinators and a food source for other animals. Today, moths also are being observed for the impact of climate change on their numbers and distribution.

Each year, NMW highlights a different group of moths to encourage moth-ers to record and photograph them in their local habitats. Found around the world, Geometridae comprise one of the largest families in the Lepidoptera order and often are called geometers and “geos.” Their name comes from Ancient Greek: geo, for “earth,” and metron, “to measure,” referring to their larvae, or caterpillars that appear to measure their movements across leaves and earth – think inchworms and loopers.

More than 1,400 of the 23,000 species are found in North America, and several are considered destructive to trees and crops. For this reason, entomologists are very interested in studying their population dispersal.

For moth-watchers, geometers can be fascinating to find and photograph at a moth night for their interesting colors and patterns. The moths usually lie flat when they land rather than folding their wings as other moths do. The males’ antennae are often feathered. They are modestly sized – just over an inch – and their colors and patterns can be quite exotic.

“Since 2012, National Moth Week has introduced thousands of citizen scientists around the world to the fascinating and ecologically important world of nighttime nature and the moths that pollinate our crops and flowers,” said NMW co-founder David Moskowitz. “People of all ages and abilities can document moths in their local habitats and contribute their photos and observations of these important creatures.”

Studying moths can be as easy as turning on a porch light and waiting for them to come, or shining a light on a white sheet in a backyard or park. Ambitious moth-ers also coat tree trunks with a sticky, sweet mixture of fruit and stale beer. Searching for caterpillars and day-flying moths is a good activity for daytime. The NMW website offers tips on attracting moths.

Anyone can register a public or private event or locate one to attend in their area by checking nationalmothweek.org for public events. Registration is free to individuals, groups and organizations, and is encouraged so people can locate public events in their area. The NMW website features an events map showing the locations of events around the world.

Participants are invited to contribute their photos and findings to NMW partner websites, as well as the NMW Flickr group, which now has more than 85,000 moth photos from around the world.

National Moth Week was founded in 2012 by the Friends of the East Brunswick (N.J.) Environmental Commission, a nonprofit organization dedicated to environmental education and conservation. It is now one of the most widespread citizen science projects in the world. It is coordinated by an all-volunteer team in New Jersey, New York, Washington State, Ecuador and Hong Kong.