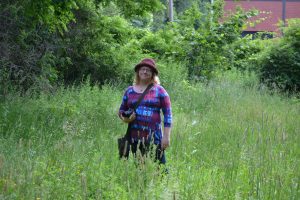 I came to moths by the same route the moths themselves do – by way of caterpillars. I have been fascinated by them for years, and they are still the primary domain of my interest in Lepidoptera.

I moved to Massachusetts from Texas in 2014, and I was amazed at the diversity of insects to be found in the woods and meadows here. My weekends have since been filled with long walks during which I have happily and somewhat obsessively photographed thousands of moths, butterflies, and caterpillars among other things.

A gallery of many of these photos can be found here: http://isobellefox.deviantart.com/gallery/

In 2015, I began raising and releasing both butterflies and moths, and it was during this time that I discovered the Caterpillar Lab (http://www.thecaterpillarlab.org/). During a visit to one of the Lab’s public outreach events, I overheard a conversation about “mothing,” and I had a bit of a eureka moment.
Why, after all of the years of photographing moths on various porches and on the walls of convenience stores and other obscure late night locations, had it never occurred to me to actively try to draw them to my own backyard?
It seemed so obvious!
I began my own mothing adventure in the early spring of 2016, with a modest set up: a single blacklight bulb and a bit of curtain cloth draped over a small greenhouse enclosure. I was immediately delighted with the results and spent many, many nights experimenting with different lights. As the nights grew warmer, I observed ever increasing diversity in the population of moths and other insects that would visit my light, and I became more and more interested. I eventually purchased a brighter, larger blacklight and moved my mothing station to the side of a storage shed. With a brighter light and a flatter, larger surface area, my success rate vastly increased. My mothing sessions usually lasted from sundown until around 12 or 1am.
During this time, I also began to make my first attempts at identifying the moths that I was photographing each evening. I gradually found several websites and a few facebook groups devoted to the moths of Massachusetts.
It was, in fact, through these groups that I became aware of National Moth Week and enthusiastically signed up to have my already nightly backyard mothing sessions included in the event for 2016.
For the mothing seaons of 2016, I have managed to tentatively identify 241 moths, though I still have many photographs that are in need of research – something I am enjoying during these long, grey Winter months.
During National Moth Week, I recorded 86 species. Among my favorites were Suzuki’s Promalactis Moth, a beautiful, brightly colored micromoth, and the Large Maple Spanworm, which was easily the biggest moth I saw all year. 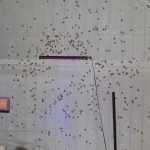 I am definitely still an amateur in the often confusing field of moth identification. I do my best and attempt to verify my findings using various rescources in the form of books, websites, and social media groups, but even with the help of those who are vastly more knowledgable, I have no doubt that many of my identifications are erroneous. There are also plenty of moths which simply manage to defy even my best efforts. This is, however,
part of the draw of mothing for me: there is always something new to see and something new to learn!