Today National Moth Week has a special guest post from Jacob Gorneau. He is the creator of the Mission, Moths of the Americas on Project Noah. 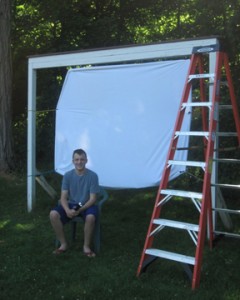 Moths are hidden treasures of the night; gracefully dancing as others sleep. Only those who work to find these beauties open themselves to the vast world of moths.  Moths? Yes: a world of hawks, owls, tigers, sphinxes, and fearful eyes, all waiting outside your door, or perhaps in your home!  Moths are a division of the order Lepidoptera, which can be translated as “scale-winged flier.”  This is because the wings are colored, and appear hairy of which are comprised by multitudes of small scales. 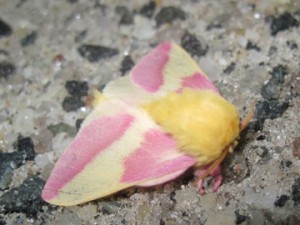 There are estimated over 160,000 moths worldwide, with thousands unknown.  There are about ten times more moths than butterflies! Even though there is such a vast amount of moths in the world, they seem to be under recognized, and stereotyped as drabby, dull, gray, creatures. Moths are not dull, nor drab! The Rosy Maple Moth (Dryocampa rubicunda) is a vibrant pink and yellow moth.  National Moth Week is a great way to promote awareness of these fascinating creatures!  Even once you find these moths, some of them still hide their true beauty.  Many have hindwings with vibrant colors, such as reds, blues, and even oranges! 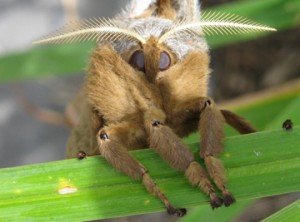 I have been in awe with moths for as long as I can remember.  Their huge black eyes were mesmerizing, and their furry bodies exhibited a friendly presence I could not resist! The variation between the antennae interested me as well!  Many moths are very docile, and tolerant of great deals of attention, especially the large sphinx moths and the silk moths.  I loved the idea of having to search for creatures, usually with the help of an outdoor light, of which they are automatically attracted to.  This phenomenon is known as positive phototaxis.  At the moment there is no absolute reasoning behind such an attraction, but there are various theories. 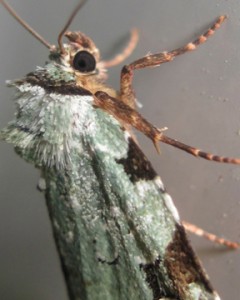 I joined Project Noah to find out more about the world’s diversity, as well as the amazing species around me.  I have a primary focus on moths of which vary from millimeters large to inches!  They are definitely a world of their own! On Project Noah, I created a Mission called Moths of the Northeastern United States, of which I had dreams to expand it to a transcontinental level.  Before it was expanded, I needed to gain many participants and even more spottings.  Once Peter Horvath and Yasser Ansari, the co-founders of Project Noah, found the mission had enough popularity, they expanded the mission to include North and South America, the name being Moths of the Americas.  The mission now documents a large range, displaying a beautifully wide diversity of moths.  It is quite amazing to find that some of the moths may be hiding in your backyard! Currently, my mission has grown to over 360 participants, and over 1,300 spottings! 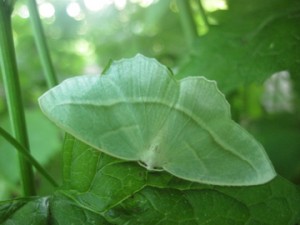 People use various tactics to discover moths.  Perhaps the most simple is turning on an outside light.  I suggest (from personal experience) to turn on a light which is a reasonable distance from the door you will be coming out of, to avoid tons of flies and other insects from flooding into your house.  I would also bring a flashlight which would help better with close-ups and to avoid any hazards which may be hidden because of the darkness.  I would turn the light on about an hour before getting outside, to make sure as many moths as possible are attracted.  Another attraction tactic I have learned about is tying a bed sheet between two trees, or poles.  You can shine a light in front, behind, or above the sheet for it to reflect.  I have tied the bed sheet to a swing set, using bungee cords, and it is basically a magnification of the outside light technique.  From my personal experiences, it does not do much more in attracting moths than just turning on a light.  At this point, it does not seem to be worth the extra work. If you have any suggestions upon other ways to attract moths, please email me at jgorneau@me.com. I would love to find more sphinx moths, as well as silk moths. 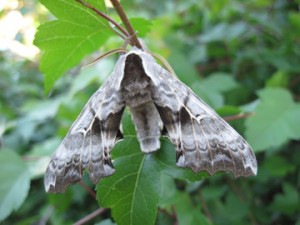 It is also possible to look for moths during the day.  Many hide along the sidings of houses, usually secluding themselves to a fairly small area.  If you have a porch, they may hide on the underside of the roof, and in any shady corners.  Many are resting during the day, since most moths are nocturnal, though some are diurnal and will be quite active during the day, such as Hummingbird Moths, Ctenucha Moths, and various other species. 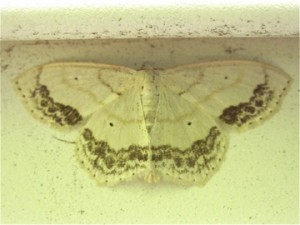 Caterpillars can be found feeding on host plants, usually during and after a moth’s mating season, which varies among species. Perhaps the most commonly found caterpillar is the Woolly Bear Caterpillar, which is black with a rusty-colored band in the middle of its body.  The Woolly Bear Caterpillar is completely hairy, with no harmful spikes or poisonous warts.  The species is quite versatile, feeding on virtually anything it is given, which makes it a wonderful way to begin rearing caterpillars.  Once caterpillars pupate, or form their cocoons around themselves, they can take anywhere from weeks to years to eclose, or emerge from the cocoon as a fully grown adult.  I have tried to rear three types of moths from the larval, or caterpillar stage, including: the Eastern Forest Tent Caterpillar (Malacosoma americanum), the Copper Underwing Caterpillar (Amphipyra pyramidoides), and the Interrupted Dagger Moth Caterpillar (Acronicta interrupta).  Unfortunately the Copper Underwing died after a horrendously hot spring day.  This is an example which shows it is best to rear caterpillars inside, in a cool area without too much sun.  I raise caterpillars in a mason jar with a mesh cap, to aerate their habitat, and to prevent a greenhouse-like effect on the caterpillars, which would surely kill them.  I change leaves and clean out the jar once a day to every other day.  Once the caterpillars pupate, I move them to a smaller jar and keep them in good watch.  If you do not think you will be present when the caterpillar ecloses, open the jar and tilt it on its side on a flat surface outdoors, where it will be able to safely emerge from its cocoon.

If you would like to identify moths yourself, I recommend purchasing David Wagner’s Caterpillars of Eastern North America, which will not only help you identify caterpillars, but it will help you with identification of many adult moths as well.  BugGuide has silhouette patterns which will help narrow your species search greatly: http://bugguide.net/node/view/21675. I have identified many moths this way.

Moths have inspired me to learn much more about the wildlife around me, mesmerizing me in every possible way.  I love to discover them hiding, like a treasure chest at the bottom of the sea.  They are amazing creatures, and I am glad we are publicizing them through National Moth Week.  I am very passionate about moths, and I am glad to learn that many others are! If moths aren’t fascination, keep looking; everyone has some sort of passion for wildlife, be it plants or predators!

This entry was posted in Mothing, News & Updates. Bookmark the permalink.